THE COUNTRY OF THE EXTREME - BOLIVIA 2018 - Part 2: Bolivian Grappa 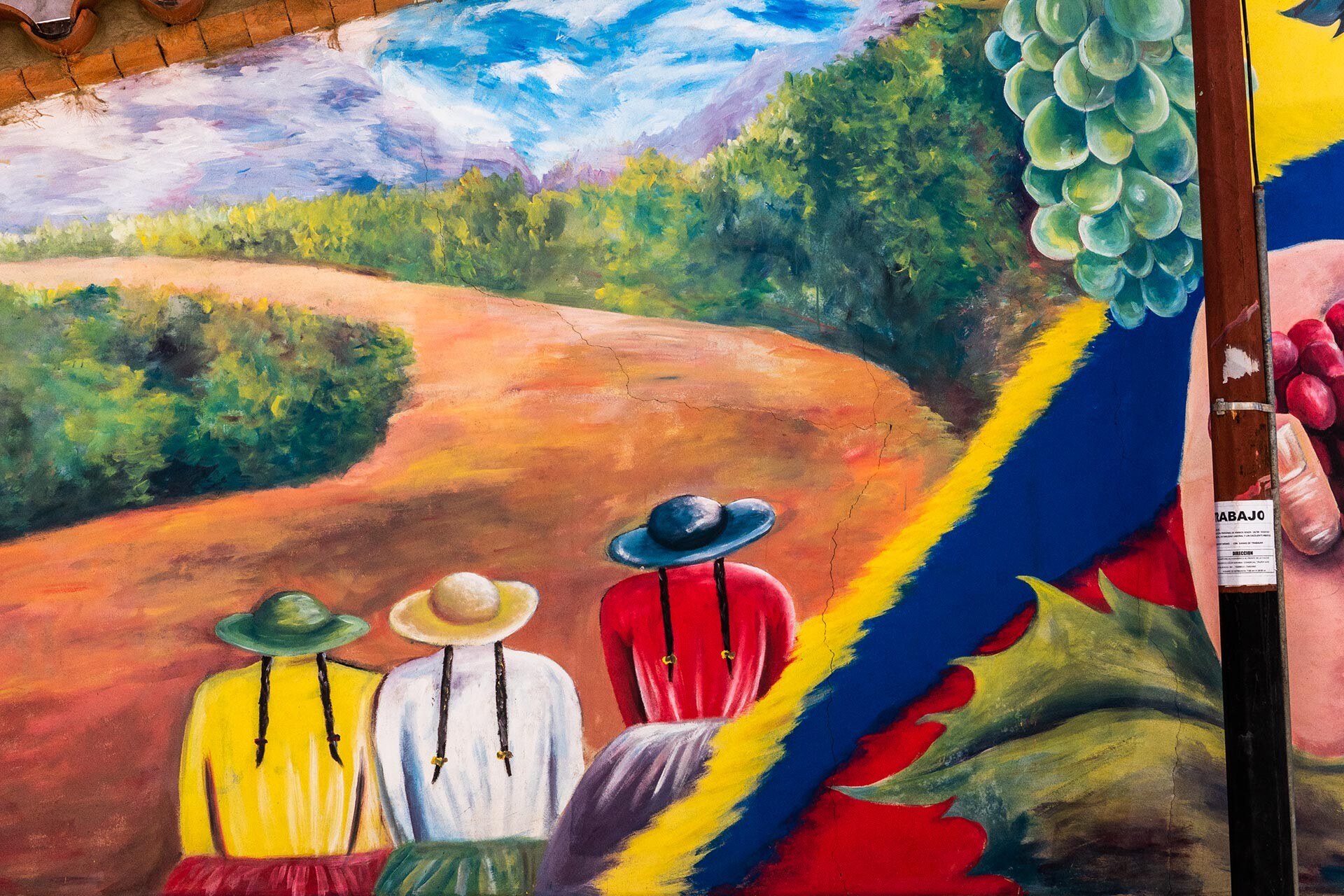 Tarija is our next destination, the center of the largest Bolivian winegrowing area. As a wine lover we visit here the largest winery in the country called Campos de Solana. Thereafter a production plant for the well-known Singani, a mild Bolivian Grappa, from the same owner. We meet Nikolas, son of the owner and his father Don Lucho. Very nice, interested and friendly. And very competent. In the heat we feel a little more light after a small wine and schnapps tasting. Definitely worth a visit there. Obviously you have to buy the excellent wine and the delicious Singani.

We have now arrived in Rosillas, a tiny village barely 15 km from the Argentine border. There we stay overnight with Julia, a world-experienced Bolivian woman, and Vicente, a Belgian working for the charitable organization Edufi in Tarija. Both have a beautiful finca named Valle de los Condores with orange trees, a pig and small round, lovingly created rose and herb gardens (re)built. Many old buildings with high walls of adobe mudbrick and so called monk or non roofs (concave tiles). Salto and Tarzan, two black old ex-street dogs, guard the whole thing with Bolivian coziness. Time does not matter here. You really forget everything from the rest of the world. Gray clouds, a supposedly slippery, not quite easy ascent and descent and the altitude here allow us to decide not to make the planned hike to the condors high up in the mountains despite a super friendly mountain guide named Francisco. That was a good thing, because Andrea steps barefoot a long sliver deep into a toe on the evening, which must be removed by the local doctor for 10 Bolivianos (that is the equivalent of 1.20 Euros). Instead of condors we discover later a "Lost Place", an very old Casa Antiqua made by mud from the end of the 19th century. You can see old German newspaper pages from the year 1903 on the walls. Today is Francisco's birthday, we serenade him and eat homemade pineapple cake with a red heart on it. It is raining for the first time. Andrea views her photos and drone videos, Matthias starts to write the blog post. The next day, 250 km to the west, we ascend again to a height of almost 3,000 m on a beautiful route through godforsaken regions to Tupiza, a mining town with many TukTuks amidst a red mountain landscape. Miraculously, we see two condors in good time, using the existing thermals to climb out of a ravine, without once beating their wings with a wingspan of more than 3 meters. On the way we see lots of donkeys, horses, cattle and tender-shy vicuñas as well as a Andean fox. On this day we quickly climb an altitude of over 4,000 m on a very violent gravel road, and then later we inspect real, dazzling white sand dunes and our first round lagoon.

The next morning at 8:00 o´clock our 7-day adventure car will be right on time at the hotel door - ready for loading and boarding. It is a burgundy colored, old, slightly battered Toyota Landcruiser with six cylinders, dual shock absorbers, roof construction and ultra-thick profile on the tires. We welcome the driver Valerio and our tour cook Martha, who will take care of our physical well-being during the day in the next week. The car is packed with our luggage, photographic equipment, food and drinks, spare wheel, five people (three rows of seats), jack and much more. The Landcruiser runs as soft as cotton wool over the largest potholes, stones and bumps in the road. An incredible vehicle that takes up to 25 liters of gas per 100 km as we learn.

The adventure begins. Hardly out of the city, there is only gravel road. By the way completely normal in Bolivia. Here in the wide mountain regions often the main routes between larger places. Valerio turns off towards Torre Huayco. This is a valley fringed by crumbling, but somehow solid rock that has spawned huge rock towers and needles of various shapes over millions of years. What an overwhelming sight! Continue on a breathtaking and dusty gravel road without guard rails up and down between mountains, hills, valleys and canyons of the Cordillera Los Lipez. Sometimes we cling to the car braces, because right or left it goes barely 30 cm from the edge of the car steeply in the depth. Bolivian music from Valerio's USB stick is supposed to distract us a bit and calm us down. After a while we get used to the driving style and the sometimes very unsafe-looking dust track. Our highest altitude so far we reach around noon at 4,810 m. Martha prepares us the first self-cooked lunch in the storm-wind lee of a rock. It tastes great. Along the way we see a lot of vicuñas, these are the prettiest, but also the shyest cameloids. Andrea and now Christian do their best to capture them photographically. A specially shaped mountain emerges. He is called nun nipple (Teta de Monja). On this unbelievable track - we really can not called it road anymore - we see the super volcano Uturuncu, even more smaller lagoons. Much wind, no drone flights!

In the afternoon we reach a mini-village in the middle of nowhere called Quetena Chico, where we spend the night. In the evening and at night it is very cold and we notice every step at this 4,240 m altitude. The air is really thin here. Now a little sunset photography and after in going to  bed with lots of thick blankets. This hostal has ice cold water, is very basic but has a bit of solar power for light. Anyhow!

We drive on breakneck paths through the Valle de Dalí to beautiful colorful little lakes like the Laguna Hedionda del Sur, the Laguna Kollpa, the green-turquoise Laguna Verde and in the afternoon the red shining Laguna Colorada. The reflections of the surrounding 5000m mountains in these lagoons are breathtaking. We are lucky, in the morning it is calm, no wind. More than 2,000 pink flamingos with black and white wings are sitting on a lagoon, flying, waddling and eating. As they start from the water, you must have seen .....! And this time they are not hardly afraid of the approaching photographer with a camera.

In any case, do not miss the fumarole field named Sol de Mañana! Later in the middle of the mountainous route, the global question arises: Who knows what penitent ice is? We did not know it. Looks super-comic, is made of pure ice, pointed and gets up to five feet high. These towering bizarre ice formations lie in the middle of one of the driest parts of the world: On the heights of the Bolivian and Chilean Andes. At 4,000 m above sea level the air is so dry that wind and sun quickly eliminate the few snow. Only those strangely bent pillars of specially hardened snow and ice remain. These ice columns are known as Penitentes - Spanish for the penitents. Because their shape is reminiscent of the typical cowls and pointed hats of penitential monks in traditional Catholic Easter processions. How exactly this penitential ice arises is only partially understood. The people of the Andes considered it a product of the strong winds of their region. But today it is clear that these only partially contribute to the formation of bizarre forms. The interplay of humidity, sun and temperatures also plays an important role. In the thin, dry mountain air the snow often does not melt, but changes directly into the gaseous state. As a result deeper depressions and pits gradually form in the snow surface. Inside these pits the air is more humid than outside the snow surface, so that the ice can melt there and freeze again on the cold night - similar to the harshness in the Alps. This results in narrow areas of firmer snow that withstand wind and sun longer and thus remain as pillars, even if the residual snow has disappeared.