THE COUNTRY OF THE EXTREME - BOLIVIA 2018 - Part 3: Rusty Locomotives and the Flamingo Invasion 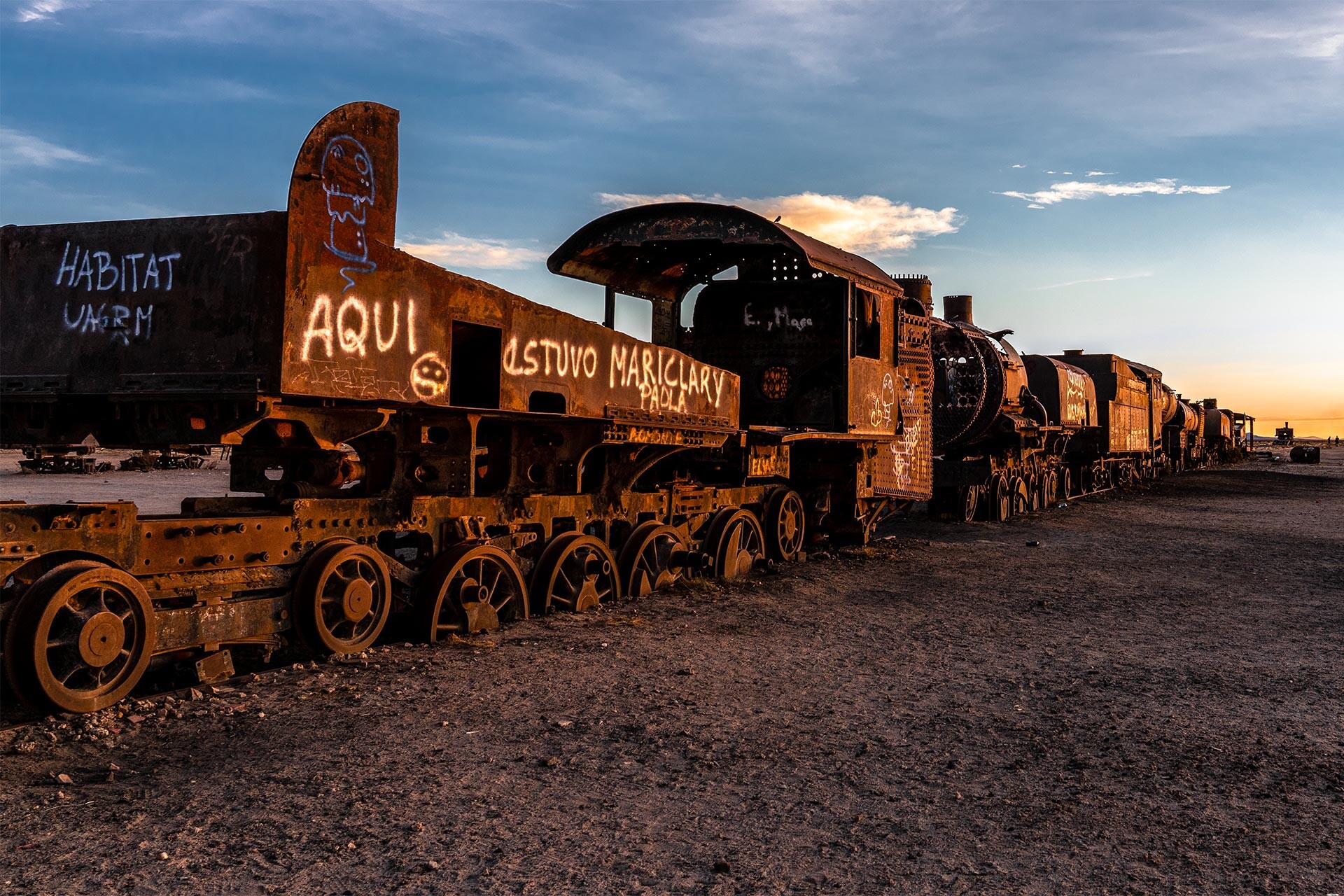 Passed the volcano Llicancabur we are suddenly only four kilometers (or even less) away from the Chilean border in the very south of Bolivia. We meet two Viscachas (a Chincilla species) sitting on a rock and waiting for food from tourists. They do not like to be photographed. In the midst of these landscapes a field of unusually shaped single rocks appears. Our driver once again steers the Landcruiser cross-country through spacious steppes. Hundreds of tire tracks accompany us. We can choose one of them that does not seem to be used so often by other cars. Suddenly we see it, the Stone Tree. It really looks like this and - what a blessing - there are no buses full of Asian tourists around. At the end of this wonderful day we will spend the night in one of the highest located hotels in the world at 4.540 m, the Hotel del Desierto (desert hotel). It is very comfortable there. From the restaurant in the evening you have a fantastic panoramic view from huge picture windows.

In the morning Christian gets us out of bed early and we cross the Siloli desert with our Landcruiser as part of the Western Cordillera, to find some time later a lonely lagoon named Ramaditas. Fantastic water reflections everywhere. Andrea gets the drone up. After two silent and relaxing hours we drive to the next beautiful lagoon. Its name is Hedionda and again it presents beautiful flamingos. We learn that in Bolivia there are three species of flamingo birds called James, Andino and Chilensis. From now on we will only mention Bol-Mingos for all those species. Continuing the day's program: Visit the deserted sulfur mine Corina between two over 5,000 m high volcanoes including an old, rusted red truck with the pet name El Zorro. Then drive through the Valle de Rocas with strange rock formations that stretch over 50 km to Uyuni. Just in time for the sunset we are at the railway cemetery in Uyuni. You just have to see the old rusty locomotives and wagons. In earlier times the station was the central point of intersection of two railways across Bolivia - from west to east and from north to south

The following day for the first time in our lives we enter the Salar de Uyuni, the largest salt pan in the world. In its place was a prehistoric lake that dried up and left behind a desert-like landscape of over 12,000 square kilometers, characterized by snow-white salt, rock formations and cactus-covered islands. This inhospitable lunar landscape is incredible! White without end, it dazzles. Without sunglasses nothing works here. The salt crust is a few inches to 100 meters thick and regenerates itself. It contains between 6 and 10 billion tons of minerals. The lake is huge. Everyone can drive here, how and where he wants. It does not stand up at all. In the spring the rain creates incredible reflections through water. When the water evaporates again, you can see polygon shapes all over the snow-white surface. What is the reason for it ??

We walk over the Isla Pia Pia in the middle of the Salar and see caves, fossil coral reefs and giant cactus. We are out of breath again. "You have to take something on yourself!" says Christian by the bye as if that were all nothing ...... Finally arrived at the top it seems there is a single white (salt) sea below us as if we were above the clouds. What a feeling! Of course back on the salt we also have to take a picture that plays with the perspective and the size of this lake surface: The coke bottle effect. It storms meanwhile enormously. The drone nevertheless flies for a short time. The desired timelapse video is much discussed in view of the wind, but then realized with combined forces. The sunset does not escape. Overnight location is the Hotel del Sal. Everything is built here from blocks of salt that have been cut or carved out of the salt lake.

Since Uyuni our driver is Valerio's brother by the name of Dionicio, his wife Sandra is now our travel cook. He drives a little faster over the gravel roads and so we have the first time a flat tyre 20 m away from the invisible Chilean border. Freshly repaired we drive over Llica, the Salar de Coipasa (the second largest salar), the flamingo lagoons Saquewa and Macaya and the colorful Chullpares (tower tombs of the Incas) of Macaya in the National Park Sajama with the highest Bolivian mountain with the same name Sajama (6.542 m). Here in the west everywhere there are mountains that look like they are covered in leopard skin. On the way there is suddenly a full stop. Smugglers have buried nail boards in the sand. They do not want tourists to drive here and discover their ways.

The next morning our Landcruiser drives into a haunted valley on a plateau of the national park. We have breakfast next to small bubbling, hot springs and small hot lakes and get delicious api - a dark red, warm drink made of black corn flavored with cinnamon, sugar, water and cloves - and Buñuelo - an extremely tasty Bolivian pastry similar to a puff pastry that is too thick served. We enjoy this dreamlike morning in the sun at 4,300 m altitude. In the village of Sajama (where somehow everything has the same name) a small festival is held, where there are many local food and drinks. "You have to eat something, otherwise the wind will take you away!" says an elderly Bolivian woman in colorful clothes next to Matthias to him on the beer bench and points to something indefinable. As if he could ever fly weightless ......!

Around noon we leave the national park and the beautiful volcanoes with the white snow and ice glacier caps - finally on asphalt!! - in the direction of La Paz for two days. Hardly arrived through an eternally long car rush our driver parks on a kind of a city highway just to the right on the side and we are standing in front of a steep mountain edge, where we now see this huge and crazy city lie ahead of us. You can´t describe it. Thousands of small orange and white lights turn the city into a sea of stars. The houses climb up the mountain walls from bottom to top. We stand there with open mouths! A first timelapse video from the top of the city in the blue hour must be made now. And at a late hour we look forward to our comfortable 4-star hotel.

La Paz. Guided tour: Calle Jaén, Plaza Murillo, Plaza San Francisco and Prado. The plaza just mentioned is also called "Kilometer 0 of Bolivia", which means something like the heart of Bolivia. Of course with an ugly-swanky Presidential Palace right in the background plus a convention building plus thousands of pigeons. You really have to want that ... In the afternoon some free-floating rides in state-of-the-art cable cars over the rooftops of the one million city (along with El Alto, which immediately adjoins, even more than two million inhabitants) with views to the snow-capped Royal Cordillera. The colorfully marked cable car lines overcome almost 1,000 m difference in altitude and were built by the Austrian world market leader Doppelmayr. After a cappuccino a look at San Pedro prison. Hard to believe, but this is a whole city block that houses nearly 3,000 inmates - sometimes even with their families and children. In the evening a live concert and dances (Cueca, Morenada) at the Plaza San Francisco. It starts to rain at 10.30 pm.

Once again we have a new (but well-proven) driver named Domingo (which translates as Sunday) and take an almost new, comfortable minibus via El Alto north to the shores of Lake Titicaca to the small, tranquil Santiago de Okola at 3,820m height. The last 20 km of the way we call now street of the dogs. The street dogs lay on the roadside about every 100 meters right and left. Christian tells us that they are waiting for food, which tourists and locals regularly throw out of the car or bus window. We arrive at the beachside sleeping dragon (called Dragón Dormido), an interesting rock formation that looks the same. The Titicaca is 8,400 sq km in size, about 15 times larger than the Lake Constance. Today we are allowed to sleep in the village with a Bolivian family with a front yard full of grenadilla and tumbo fruits/flowers. Our hosts are Don Vicente and Doña Juliana, who are committed to making us feel good. They serve food without end with some dry quinoa (as all over Bolivia by the way) and different kinds of potatoes plus a very small fish called Ispi. Don Vicente has almost black tanned skin, is a maximum of 1.65 m tall, loves potatoes for his life and has probably been a footballer through and through.

The planned fishing on the lake is canceled twice in a row, but instead of it we have together with Don Vicente an international football game between Bolivia and Germany, which finally ends in performance 1:1. But more than a twice 15 minutes game was not possible at this altitude ..... Later we walk across the fields close to the lake and observe the hard, agricultural work of farmers and people here: Small potatoes are thrown in in a row and in deep furrows by hand for planting new potatoes, plowed by hand with two oxen in front, tractors mostly not seen there. A very old woman shows us how to weave a kind of carpet towel out by hand. Despite her multiple Spanish explanations to Christian we do not understand until the end how it really works. In the evening we sit around a campfire with our friendly hosts and listen to Don Vicente and his son a little Bolivian music.