THE THUNDER OF THE BLUE ICE - GREENLAND 2017 - Part 1: Calving glaciers and monster icebergs 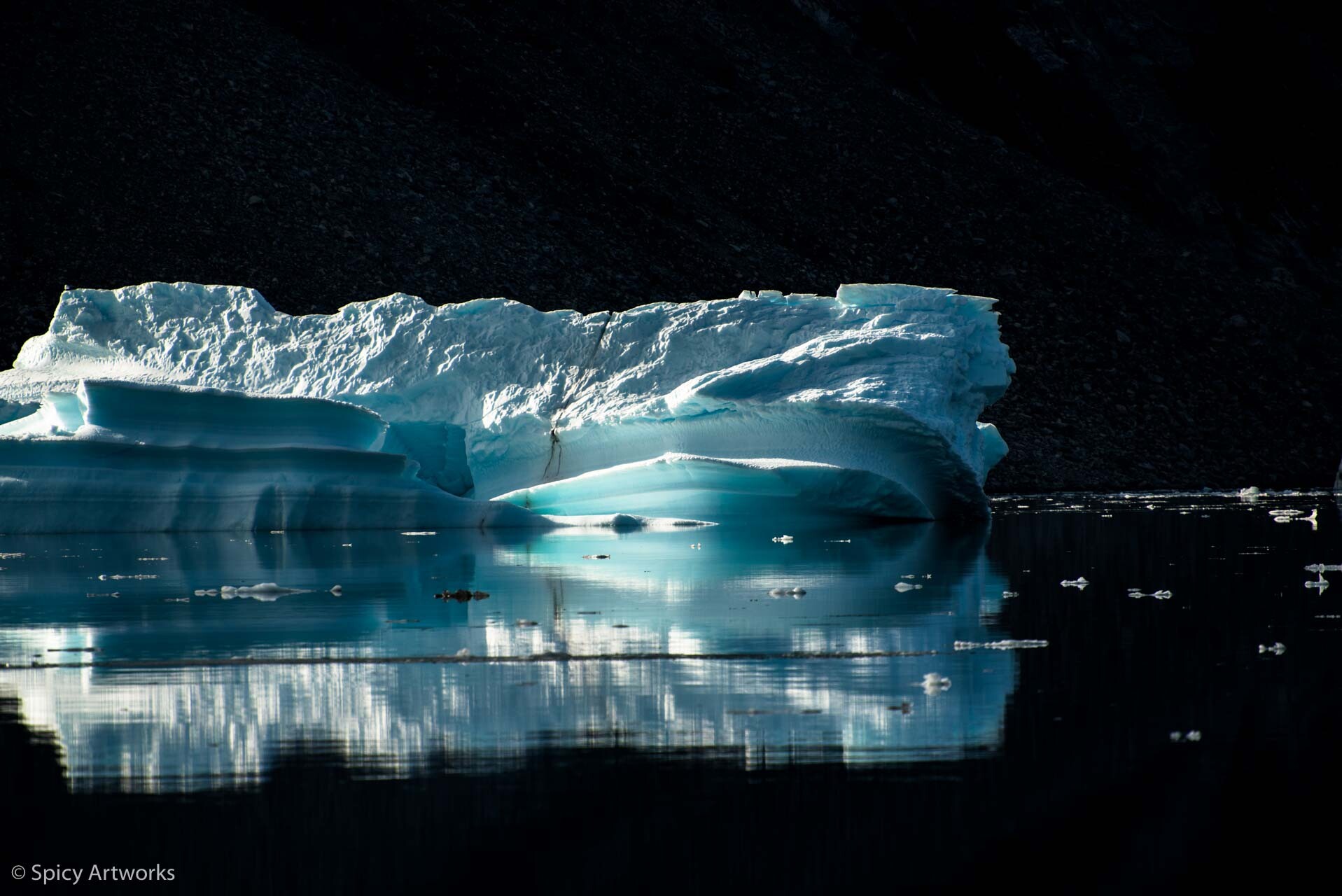 We will not be able to convey it in the right way only by the photos: ​​The monster icebergs, the domestic "inner" ice, the ice cold air. These feelings, the special moments, the silence, these views. In addition the landscapes: Rough and frightening, beautiful and unique at the same time. But all of them will remain in our hearts and in our memory. We will have to tell a lot about this at home to communicate that intense feeling to the rest of the world.

The icebergs turn around. They are constantly changing. Nothing is the same as before. It thunders violently in the glacier - like a thunderstorm. The enclosed air escapes in the ice, deep rumbling, but you can see nothing. Angry, uncanny. In the fjords again a large part of the iceberg breaks off and falls into the water with a great din, splashing in all directions and producing dangerous and high waves. Originally once up to 1 km thick, they stay hanging right in front of the town Ilulissat in the depths of the Disco Bay at only 250 m until they are melted, so they can continue to die lonely in the wide sea. The ice here comes from one of the most productive glaciers in the world, the Sermeq Kujalleg. He "calves" 35 square kilometers of ice into the UNESCO ice fjord. He "melts" so much ice in a year that the US would get a year of drinking water from it.

The gigantic chunks of ice thundering from the glacier into the sea have many different shapes. We see incredible forms: dragon heads, spaceships, sculptures, fantasy figures, cubes three times as large as our house at home - exactly "cut". They are sometimes as high as a 5-storey high-rise - incredible, they look like huge snowy mountains, but they are not. They consist of pure white ice. Some look like huge plates, others look like bizarre mountain landscapes. Deep blue columns, cracks from top to bottom, partial as pulled with a ruler, holes, caves ("whale garages"). Often you can see large traces on the ice as of animals. But that can not be. We humans are so small comparing with those huge icebergs. The surrounding fjord water looks like a thick cream, so gentle and soft in one day.

The Eqip Sermia glacier is at its demolition edge up to 300 m high and 150 m deep under water, he "calves" in the year 45 km of ice. 40 million tons of ice per day float into the fjord. We stand with our boat right in front of it: it crashes and thunders continuously. The fjord lake around us is littered with large and small pieces of ice. Everything seems to stand still. The water rises and falls very slowly. The pieces of ice move in the slow motion. It gets a dizzy when watching. We are the last ones to stay at the Eqi Camp in a Comfort Hut with an oversized panorama window. Over night the water pipes freeze. There is a 3-course menu at the Café Victor with red berry groats and whipped cream as a dessert. But no washing or showering at that night.

The shimmering colors on the water: deep blue, mint, light blue, gray, white, dark gray, black, in the evening sun delicate orange, peach-colored and pink. Often wildly mixed on a "lake". A true pastel color battle. Superb blue icebergs in South and East of Greenland - as if they had been lit and lit from within. The icy water is exactly zero degrees cold. The glacier ice minus 8 degrees.

There are white, blue, rarely also green ice and glass-clear ice (re-frozen "ex" ice) - it is strangely called "Black Ice". It is super dangerous for ships, as you can hardly recognize it on the water and it is very hard.

Where do the colors come from?

White as in the picture book

Most icebergs are white as in the picture book. This is due to the history of the colossus. The ice of the icebergs is formed by snow which is compressed in the glaciers in the country. Air bubbles are trapped in the ice. They scatter the light very strongly in many directions. The effect of the mixture is a glistening white iceberg.

Blue as the sky

Deep blue, an iceberg shimmers only when it contains very few air bubbles. This fact has to do with the characteristics of low-air ice. Pure water ice is extremely permeable to the visible light. In addition, a light beam without disturbing air bubbles keeps its direction - it goes straight ahead. Behind a one meter thick clear ice layer one could clearly see the sun. In explaining why icebergs are blue, the core is the color-dependent attenuation of the light. Water ice swallows the visible light according to its color to varying degrees. Red light is absorbed most by ice, orange less, even less green, and least blue light. There is of course system behind it. Each color corresponds to a different wavelength. The larger the wavelength, the more light is absorbed by ice. Frozen water acts like a very weak color filter: The colosses shimmer blue because red, orange, yellow and green light is swallowed inside the icebergs. Through measurements one has found out that white light in the ice has to travel a distance of about three meters, until almost only blue light comes out. The same effect can also be observed in glacial ice: the walls are often deep blue in columns and caves.

Every now and then there are green icebergs on the oceans. Its color is presumably caused by trace substances that have entered the ice from the sea water or from the air. They may be e.g. from marine organisms - such as plant plankton. Green are, above all, icebergs, which have ice growth on their bottom and later turned around somehow. By the seizure of seawater on the "belly" of an iceberg, organic material enters. Because this material is yellow-green, the iceberg also shimmers in this color.

To the south we make a beautiful boat trip to the Qooroq Glacier. The swimming icebergs are doubled by their own mirror images. It crackles and cracks around us as we stop in front of the glacier and we are drinking a Martini with real Glacier ice. Later the boat runs so fast that the in the night frozen water surface flies in the form of glittering small ice sheets in high bow.

80% of Greenland is covered by ice. These are 1.8 million square kilometers as much as Germany, France, Italy and Spain combined. Maximum 3.5 km thick. And from this Inner Ice come countless glaciers, ice lakes and rivers, ice fjords - around Greenland, the largest island in the world.