THE THUNDER OF THE BLUE ICE - GREENLAND 2017 - Part 4: Kalaalit Nunaat: The country of the people 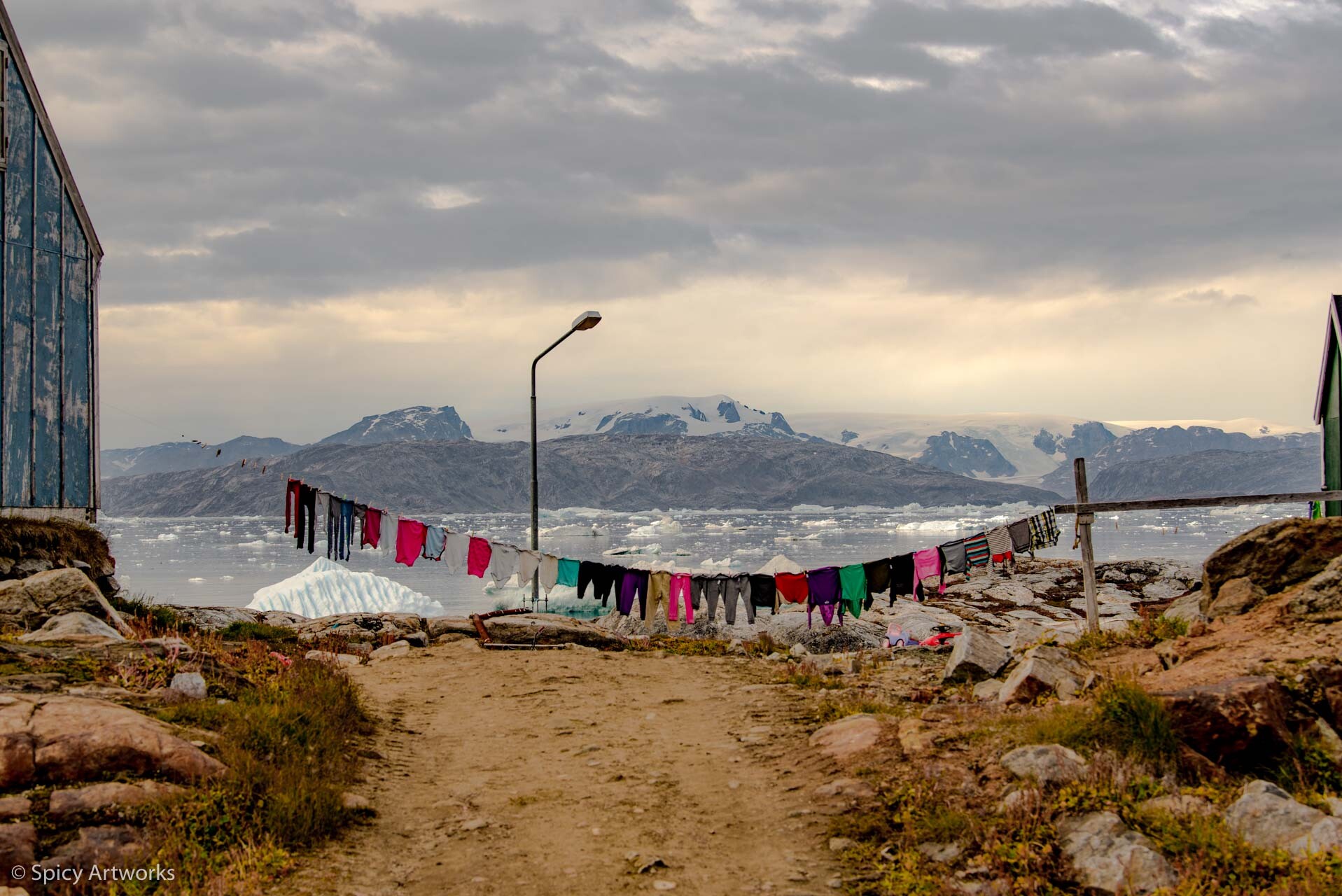 The wood of the colorful houses stands firm over 100 years because the air is extremely dry. Everything is built on barren, big rocks. There are no sewage treatment plants in Greenland - except for the capital Nuuk - and almost everything flows into the sea, if the houses are not equipped with septic tanks. Water pipes are installed above the floor, with extra-current heat conductors inside, so that nothing freezes. The places of Greenland are not connected by roads or railway tracks. The "road" to Greenland is the sea. They use ships, airplanes, helicopters and dog sleds as means of transport. The people here live from fishing, hunting and tourism. Overall there are only 56,000 people on the largest island of the world. Everything is rather simple. Luxury is somewhere else. Greenland is somehow a part of the Danish kingdom, but it is an independent state, not a part of the EU. Geographically it is America. In the winter they all want to travel into warm regions of this planet. English is next to the five different Eskimo-/Inuit dialects, which are not understandable for Europeans. Greenland is, by the way, the country with the longest words in the world (up to 150 letters!). You can not pronounce or even read aloud.

In Narsasuaq we get to know "Kunguu" during some white and red wine, more precisely Concordia Gabriel, a small Greenlander who lives in the southernmost village of Greenland. She speaks perfect German language and gives us lots of information about her country. Ulu is a special knife for females of the Inuit. And Tupilak is an ugly lucky charm who drives the evil spirits away. Everything was very interesting. We only listen to her.

Narsaq was next to Tasiilaq the most beautiful village we have seen. Good hotel with Tzatziki. And many colorful houses idyllically located at three fjords. Andrea makes a superficial photo of an old fisherman from Greenland, who sells large red fish in the harbor together with his wife. At night when photographing the ice crackles again very loud.

We will experience the most beautiful night of our tour. We experience the beginning of the Indian Summer with its fantastic autumn colors, rusty, yellow, green and brown. In Narsarsuaq are the only 6 real trees of Greenland (1 birch and 5 firs) about 2.50 m "high". Otherwise only low shrubs and heath-grown fjell grounds. Naked, giant rocks, high mountains like in the Alps, boulders, glacier morays, very long fjords.

Waste disposal as in Central Europe does not exist here. Rubbish dumps across the rocks, plastic bottles in the sea water, scrapped old cars and ships are simply turned off. Many Greenlanders have (almost) no more teeth in their mouths. Incest, unemployment and alcohol are major problem areas.

Tasiilaq and Tiniteqalaaq: THE FORGOTTEN PLACES of East Greenland. From Nuuk to Kulusuk, the smallest airport in the world on a very muddy piste and in 10 min. with a bright red helicopter to Tasiilaq. Beautiful and so remote. The people there get too little infrastructure building money from Nuuk. This is why very little investment is made. We make a 6 hour boat trip around the island of Ammassalik and visit the very small village of Tiniteqilaaq (the meaning of the name: "The road, which is dry in low water") at the end of the world. Tiniteqilaaq has a population of 110 inhabitants. Wonderful icebergs directly in front. Only 20 of the 110 inhabitants have work. Everything very poor, but a supermarket is also there. An old man climbs with his two crutches over enormous, angular boulders at the harbor edge to get into his boat. On the way back there is a storm, the small boat fights through the 3 - 4 m high coral reefs. It is cold and really dangerous. We are glad when we see land and this very restless boat trip is over.

From the rest of the world there is almost nothing in Greenland. Not bad either.