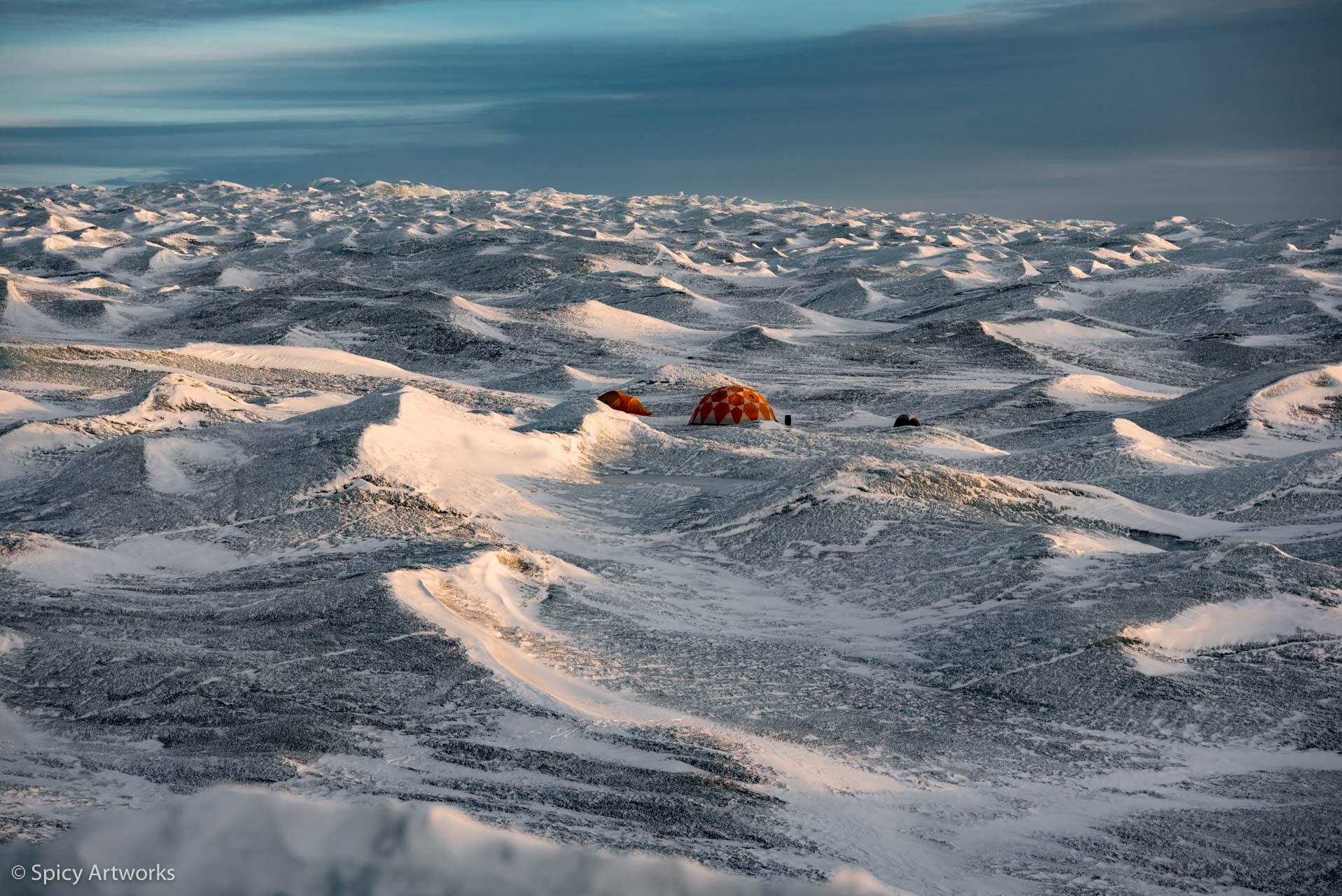 First we see is an "Arctic Desert" on the way to the adventure. Then we are finally on the "Inner Ice", which is also called ice sheet of Greenland, and spend the night in the tent and a very thick sleeping bag.

A kind of expedition to Four (two girls from Singapore) plus the guide Stefan and his "apprentice" Lars. With a converted old fireweave car, a fire-red Magirus Deutz, we drive in two hours on a terrible gravelroad (built by Volkswagen) to the east, where the Russell glacier meets the edge of the giant inland ice sheet. We pulled provisions, toilet and sleeping bags on three hard plastic sleds by hand over the rocky moraine, later also on the ice. Armed with crampons (crampons) and pointed hiking sticks. Extremely firm, light blue and mirrored ice. Deep-frozen, huge wave throughs as far as you can see. A complete ice ocean. Totally lonely. Only ice and sky. What a cold world. And ancient. Then finally at the base camp. A large orange ball tent for eating. We in a small Himalayan tent to be built by ourself. In the evening an one hour walk for practicing, then small bags of aluminium to be filled with hot water to the life awake of goulash or beef with rice or similar. Eaten. A totally slippery, life-threatening plastic toilet placed in a very small cold tent on the ice - the experience at all! At least for Andrea, who slips out of that thing in the middle of the night - sitting on the plastic toilet. What a picture, but nobody saw this scene. No alcohol, ice melted to warm water, nevertheless in the tent before falling asleep for us a mini-bottle of Tequila. We fell asleep somehow.

On the next morning "Continental breakfast" with Nutella, thickened butter, Nescafe and muesli above the gas flame, to-just-with-water-making. Then a 4 h hike over the ice. Andrea breaks at the ice hill steep downhill almost the legs and her knee. Everything goes well, but small bloody wounds. The ice is super firm and relentless. A dreamland of ice hills, frozen rivers and deep canyons. And glacier clefts. The colors are fantastic. The blue ice path is incomprehensible. In a state of exhaustion we expect a warm shower in the "7-star" Polar Lodge in Kangerlussuaq. In the morning we will continue south towards Narsasuaq, Itilieq and Igaliku. It was a sense of sensation to walk on such old ice. Pretty scary. And it was already a physically very hard tour - for the two young ladies from Singapore and us. We were not prepared for it. But very proud that we have managed and seen and felt. The real Greenland ice, so close.

Back in Narsarsuaq there are two fantastic sundays without clouds in the sky. We both sit in the warming sun and enjoy the quiet landscape in this airport resort. The photo tour into the land of the colorful houses will remain forever unforgettable.

THE THUNDER OF THE BLUE ICE - GREENLAND 2017 - Part 4: Kalaalit Nunaat: The country of the people
IS` JA NICHT SCHARF - RAVENSFEUER AUS RAVENSBURG