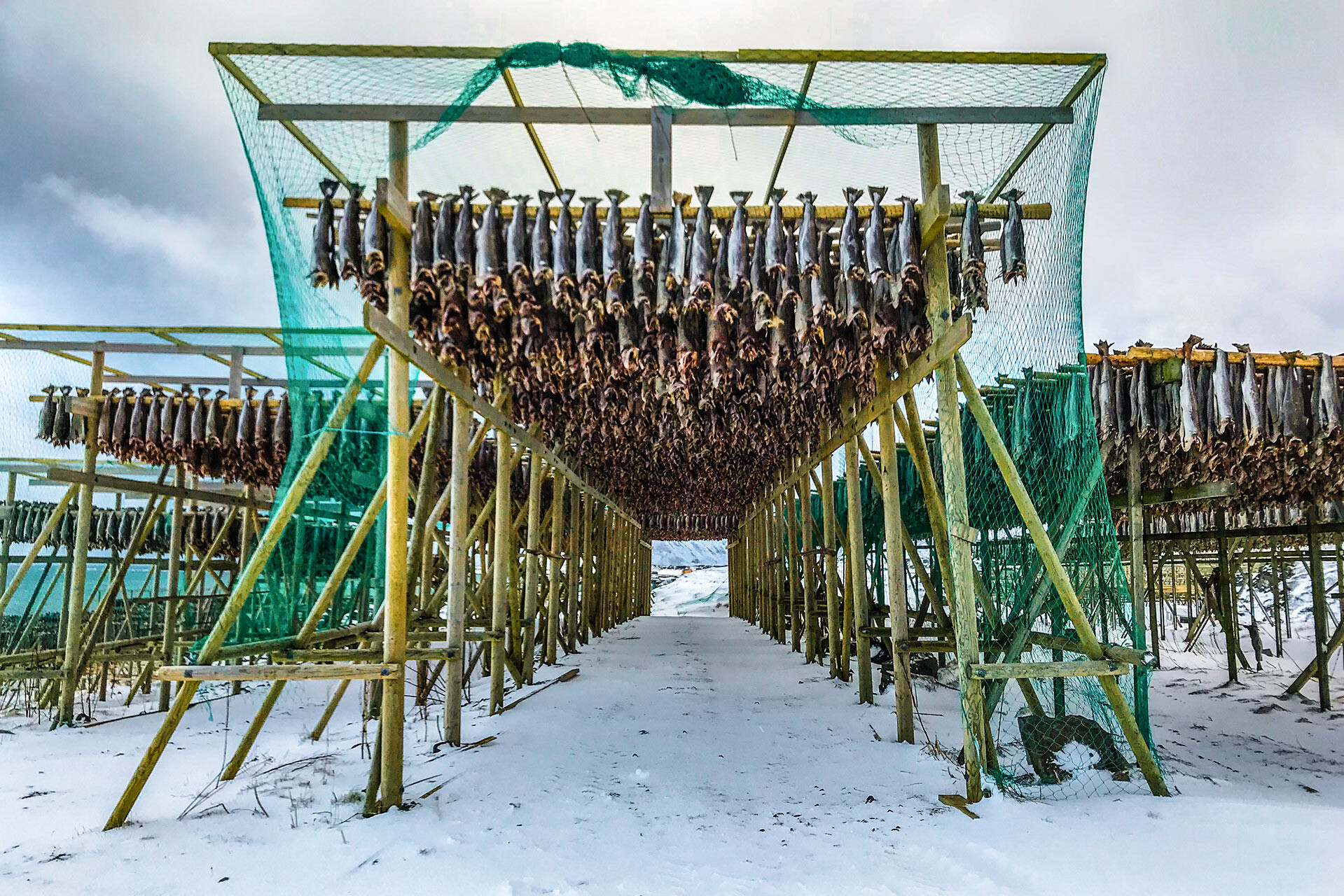 DORSCH, KABELJAU & SKREI OR WHAT?

In such a place you will like it to hang around. So you could also call the scenery to be found almost everywhere on the Lofoten. It smells (if this word describes it correctly, you sometimes do not know exactly ....) here very much for fish. Countless cods hang on long, staircase-like racks made of wooden posts and become stockfish. In a duo, moored to the tails, they dangle upside down to dry in the cold March air. Headfirst? Not really. They lost their heads right after catching them at a fish factory. Involuntarily you wonder what has happen with the many heads of the up to one and a half meters long and up to 40 kg heavy fish. Quite often we find the answer in the immediate vicinity. Thousands of fish heads also hang there on such wooden racks for drying. When they finally get completely dry and do not mess around, the heads come into large containers for West Africa, where they play the protein-rich lead in the fish soup, which the Nigerians love very much. Luckily for Africans, this type of culinary processing does not catch on to the fact that they are deprived of a substantial part of the fish's head: The tongue. This one to three centimeters long muscle is cut out of the fish before. According to ancient custom, the children are entitled to cut out the coveted fish tongues. Even her fathers and grandfathers earned something in this way. It is an ancient tradition that the children of the Lofoten improve their pocket money by cutting the tongues - and at the same time find early access to fishing, the island's main source of income.

However, before the cod (or cod) loses life, head and tongue, he has a long journey behind him. That's why in Norway he's called "Skrei", which comes from "to step". Finally it means "The wanderer". Skrei spends the first years of his life north of Norway in the Arctic Ocean of the Barents Sea. When he becomes sexually mature after six years, he swims more than an incredible 800 km back to his birthplace, the Lofoten, to spawn. The regular migrations of the Arctic cod help the fishermen since the Middle Ages to money and reputation.

Almost all the people who come to the islands in the first months of a year attracts the "Torsk" - the cod. It therefore begins to stir new life in the sleepy harbors as in Henningsvaer. The Nordland fishermen are chugging in daily, equipped with long lines or nets to catch the coveted fish. Everywhere boats are moored. Until far into the night there is a lot of activity, because some people leave late to set the nets.

Only 5% of the catch is not processed into stock or codfish (in Spanish-speaking countries it is called bacalao) - an ancient commodity that has been securing income for over 1.000 years. At the traditional "Mölje" the Lofoten people and their guests can taste poached cod, which is served with tongue, roe and liver sauce, and with red wine. But you have to like that, our thing is not the stockfish. This preparation variant definitely not.

# 1: Better renting a "Rorbur" - a mostly small, red cabin (formerly that were real fishermen's cabins) - than booking a hotel. Or rent a "Cozy Beach Guesthouse" of the German photographer and owner of the Click Cafe Lofoten called Ann Lisbeth Eriksen in Ramberg (https://www.facebook.com/clickcafelofoten) by AirnB. The advantages: Everything is under your own control (for example self-sufficiency), no dependencies, greater flexibility, more romantic, no Asian hotel tourists and much more, but generally not much cheaper.

# 2: The Lysstoperi & Cafe in Henningsvær. Delicious cinnamon rolls and much more. From the outside the shop looks a bit like prefabricated, but from the inside it is very cozy. Not only tourists meet here. There offer very good coffee, great cakes and hearty breads and also a lot of other crazy little things to buy. Because with a direct passage to the cafe, there is a kind of mini candle factory. The atmosphere is totally beautiful, here you can sit and chat forever (https://www.facebook.com/henningsvarlys).

# 4: Those who love it can spend an extra day or two in Tromso. The following is to experience there (f.e.): Two huge roundabouts in a dark car tunnel, a nice harbor with cruise ships, a lovely Fjord bridge, some nice pubs and fish restaurants (but very expensive!), a friendly shopping street with old houses, a mountain observation deck accessible with the Fjellheisen-Cable Car, a great starting point for own (or purchased) Northern Lights Photography rides and/or a car tour in a westerly direction to the peninsula Sommaroy with the endpoint/place called Hillesoy with 1.000 photo opportunities, reflections and fjord bays. You can spend the night (but its costs some bugs) with harbor view in the Scandic Ishavshotel (https://www.scandichotels.no/hotell/norge/tromso/scandic-ishavshotel). Food should be eaten cozy and long (and more cheap) in the "Pasta Fabrikken" (http://www.pastafabrikken.no).

# 5: At the end: The Lofoten have enough gas stations are - in spite of different reports - in our opinion sufficient; Nevertheless always observe the current tank level. Supermarkets are also available.

# 6: We had stayed at the Scandic Hotel in Leknes for 12 days. We would not necessarily recommend this hotel despite predominantly positive guest references. There was one or the other, which we did not like for the price paid.

In any case - This was not the last visit to the wonder islands. We will be there again in late summer/fall.

"LOFOTEN IN MARCH - A WINTER WONDERLAND IN NORWAY"

And as the final add on of our Lofoten travel blog still a beautiful video to watch, enjoy and listen.
Just activate THIS LINK. Have fun with it!

THE ISLANDS OF THE FISH TONGUES - OR: HEADLESS ON THE LOFOTEN - 2019 - Part 2
SO EIN KÄSE ! UND GANZ UND GARNICHT GRIECHISCH