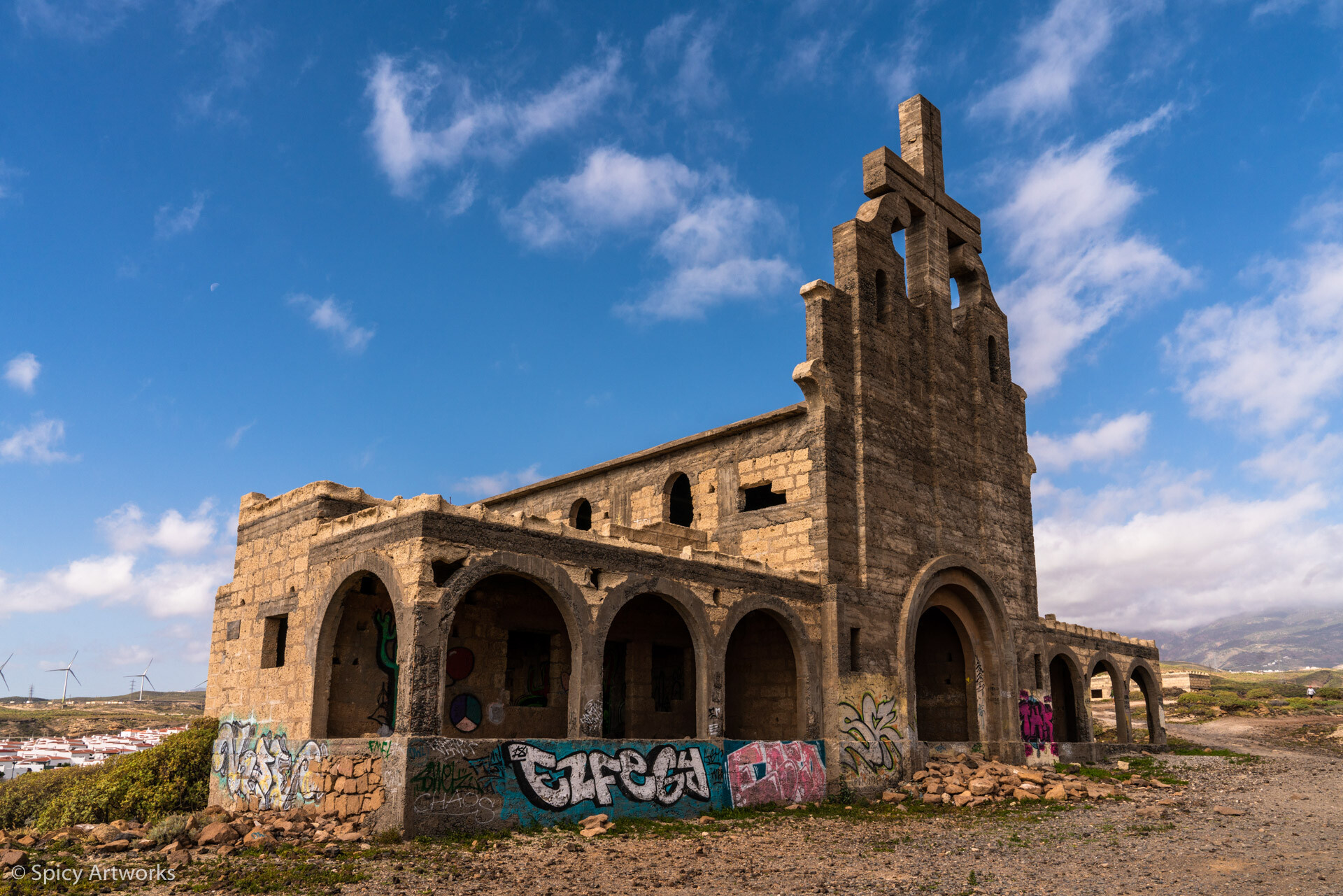 Seven days long we visited the Canary Island called Tenerife around New Year`s Eve. This time we had set our photography todo list with a focus on special locations using the two Sony`s and the Mavic Pro 2 - including the obligatory timelapse videos. Of course, as always, other human cravings and pleasures have not come up short, such as eating delicious tapas and fresh fish, sipping Spanish red wine, absorbing the heat, coming to rest, watching the stars and the pitch-black night sky on the Teide, talking and driving down- and uphill roads with x-hairpin bends. Every day bright sun at around 21 degrees and blue sky - sometimes more with less clouds. Tenerife is always worth a (short) visit. But we do not report about this aspect this time. Today we want to jump on four main points of our interest and tell you a little about this and show interesting pictures in our travel blog.

If you take the motorway north from Tenerife South Airport, you will not miss it: The ghost town of Abades. You can already see some of the 40 empty buildings from afar. They date back to a time when World War II was raging in Europe. While the Canaries were largely spared the war a leprosy epidemic widened here. In 1943 a village for sick people should to be built there, also called "Sanatorio de Abona", to bring together all leprosy patients here. Because there was a curse on the island: A total of 197 leprosy deaths and thousands of patients had recorded in Tenerife. And only there. The solution should be a sanatorium and a crematorium. A village dedicated to leprosy sufferers. But as soon as millions of pesetas were invested, the disease subsided and the construction project was withdrawn. Abades was left to itself, a ghost town emerged. Everything fell into disrepair. The highlight of a sightseeing tour is the never completed church in Franco-typical style. A false step and a dozen pigeons fly out of the church, as if they can not decide whether to flee from the unreal scene or the intruder that disturbs the deliberate rest. No warning words or barriers that could prevent people from entering this sinister place. It should also be an attraction for occult rituals and paranormal activities today - at least if you believe a website from Tenerife. Dead chickens were allegedly found, with chalk painted symbols on the floors and much more. It has also been conveyed that sometimes strange sounds can be heard in the church and its surroundings. Or is it just the fantasy that passes with you?

But what impressed us most and cast a photographic spell over on this Secret Place was the small and large light incidents and games (as we called them) through broken windows and doors of the old decaying buildings. Wonderful small and large (triumph) arches, rectangular openings and gates, passages, round windows. And outside the glistening bright sun, which came exactly from the right direction that day. The result was rhombusses, circles, ovals and rectangles on dusty floors and walls. Bright and lightful. As if you had put down or stapled white paper in large format there. Sometimes it even looks as if the photo has a stain or error. But that's not really true. It was just a pleasure to be there. Not always so easy to capture them without having cut off small corners and curves in the later photo. But please take a look at it yourself! The day in this ghost town was like being on another star. At no time would we have thought that we are staying on a famous holiday island ....

Andrea is not mature architectural photographer. Lines, shapes, geometry, order of, in or on buildings, towers or halls have not been so much in the center of her photographic love and is not her first priority. But in Tenerife this time it was a little different than usual. At first she did not really want to. Namely driving in the car into the capital of the island called Santa Cruz (northeast of the island). But then she let herself be convinced. And she was not disappointed. Because the actual goal was the "Auditorio de Tenerife" located on the edge of the sea right next to the harbour. It is a congress and concert hall designed by Spanish architect Santiago Calatrava and completed in 2003. The 60-meter-wide pedestal swings crescent-shaped to 57 meters high and ends after about 100 meters in a kind of a peak above the hood or shell-shaped roof of the building. This concrete sickle has no actual function and is only used to illuminate the concert building from above. The outer skin of the building is covered with "Trencadís". The millions of fragments of white tiles give the building its radiant effect. The overall effect and the exposed location on the harbour are reminiscent of the Sydney Opera House. Often the architecture of the building is also associated with a wave or a sailboat. A friend even has the following idea in addition: "Of course the house is not from this star. From the front the engines are left and right but good to see!". What do you mean? In any case you will always find new details and settings when you look closely. And almost in snow-white on a blue (sky) background. Really a dream! You just have to see that. So no way to escape!

However this architecture is not enough. We still had our lighthouse tour in our plans. You think now, yes, we know those buildings. But we have to disappoint you. Not all of these light towers look the same in the world. That's not what the lighthouse near Punta del Hidalgo in the north of the island is for. Nothing reminds you of its original function when you stand in front of it and look upwards. Super futuristic style. Say yourself ?! And we were also taken by this sweet lighthouse: In our opinion it is one of the most beautiful and unusual lighthouses of this Canary Island. We finally find it after a kind of random drive through narrow and very small streets between high banana plantation walls on the west side of the island. Right on the edge of the village called Buenavista. The lighthouse looks like a white rocket launch pad with an oversized red spiral next to it. Unfortunately, we could not climb the spiral staircase and look from above into the distance ....

You might also call this section of the blog "The Banana Plantation Ghosts." We are driving from our finca near Santa Ursula in the direction of the islands southwest. Through the picturesque Garachico and Los Silos to Buenavista, where a fantastic golf course and a delicious seafood restaurant on the edge of the sea called "El Burgado" are located. From the village there is only a single access road to the Punta de Teno, the red and white striped lighthouse on a black, sharp-edged lava rocks close to the Teno mountains. This very narrow street is only open for private cars from Monday to Wednesday. Along very steep cliff walls, the trail winds upwards until you come back down to a level that forms the southwestern tip of the Canary Island. But on the way to the lighthouse we have to stop abruptly.

To the left hand torn fine-meshed nets flutter on metal longitudinal and crossbars. In the sun they shimmer sand-coloured, sometimes brightly sea-green. There is silence. Nobody is to be seen. We go up a dusty path to get out. It's a bit spooky. What was this? We recognize shapes and figures that form the fine-meshed netting. They move slightly in the wind. Sunbeams fall through them. Then we can see and feel the ghosts of the former banana plantation. Andrea shoots on it as much as possible. A lot of fantasies come to our minds. Like in an end-time movie ..... Only Tina Turner is missing, then "Mad Max Tenerife" would be perfect! And now our drone has to run. Andrea lets her up with her practiced hand into the sun-drenched, almost dark blue sky and it takes pictures of the whole drama. Nothing lives here anymore. No shrub, no banana. At the end we find a lot of rusty irrigation pipes and machinery. The mood is a bit depressed as we drive off towards the lighthouse.

On this tour we experience for the first time two types of sensational waves:

The first up to 2.300 m altitude. This is a sight you will never forget again. Towards late noon we reach the "Las Canadas" coming from the south. This is the area of the former huge crater of the 3.718 m high volcano called Teide. Fully filled with rust red, black and brown cooled lava. An inhospitable area. Unapproachable, not meant for people. With several 100 m high mountain walls, the "Plateau" looks like an oversized saucepan. Warmth, sun, little wind. We walk into a reasonably accessible flat terrain and have just set up our tripod plus camera. There it starts. From the outside huge snow-white clouds begin to crawl over the crater walls and over their edges into the caldera. Slow and deliberate. That's incredible! Like she was putting somebody in there. They waver, get smaller and bigger again. As if it were gorgeous cloud ocean waves. Oh my god!

The second photografic experience offers our faithful drone called Mavic Pro 2. We are located on the northwest side of the island right on the volcanic and rocky cliffs with sweeping views of the Atlantic Ocean. Thanks to Andrea's professional drone settings the little machine makes beautiful photos of snow-white and turquoise coloured wave spray on dark blue-green ocean water. Razor sharp. It splashes and hisses incessantly. And last but not least she makes pictures with super short exposure time by the big telephoto lens. The waves sometimes shimmer full turquoise. Almost like in Hawaii. We later think of how wonderfully beautiful this ocean atmosphere and its effect on us was after all.

Probably not the last time!

..... AND AS A CONCLUSION AND BONUS OF THE TRAVEL BLOG A SMALL VIDEO FOR YOU NAMED

"THE MAGIC ISLAND" - IMPRESSIONS OF TENERIFE 2019"

A special Canarian volcano spot on the earth. You have to search a bit until you get there, where you can turn around the Teide and make from high above some nice little video clips on this island called Tenerife - with the governments permission. What a blessing, that time lapse shots are not under a Spanish approval. That's how we created this video during our photo tour on the Canary Island next to the travel blog. The beautiful ocean waves from above, sometimes a timelapse of the sunset behind the volcano. Or an exceptional lighthouse. And a few more small visual surprises. To relax, watch and enjoy.