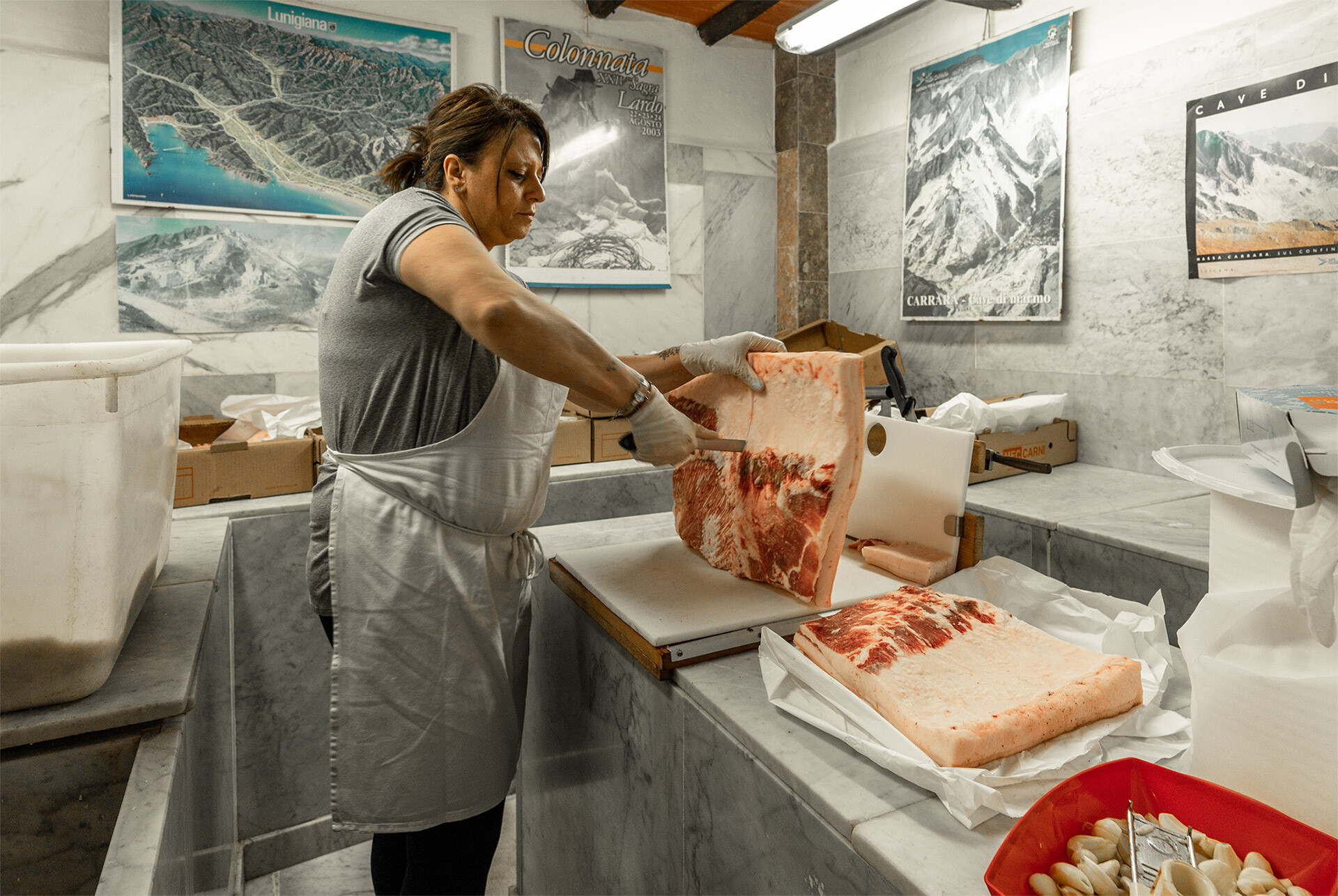 Because first of all, you do not eat it every day. And secondly, it is sensational what they know to do with bacon in Tuscany. Lardo di Colonnata tastes heavenly. In Colonnata the world stops. Only a crooked mountain road creeps up from Carrara to this corner of the Apuan Alps. To the left and right of the narrow valley are insights into gigantic marble quarries, which have eaten away like white bleeding wounds in the mountains. For its immaculate marble, the area is world famous: Already 500 years ago, Michelangelo was here and let cut out the brilliant white "marmo statuario" of the mountain rocks for his "David“. The little road ends abruptly in Piazza Palestro, in the middle of the village. Colonnata, no 300 inhabitants, clings defiantly on a ledge, an orphaned schoolhouse, narrow lanes, in front of the village church a bulky marble monument in honor of the "cavatori", who the miners killed in their dangerous drudgery. From the hard work of marble quarrying they all once lived here. Today the marble feeds many Colonnatesi in a very different way: in the cool rock cellars of their houses, they all have at least standing one "conca" (pronounced: konka). A narrow chest of fine-grained marble - one meter high, one meter wide, one and a half meters long. In these delicate sarcophagi sleeps for well over six months, which makes gourmets all over the world reflexively mouth watery: most delicate, snow-white, in, among and between sea salt, herbs and spices seasoned bacon - the "Lardo di Colonnata".

GUARDIAN PATRON OF THE FINEST DELICATESSES

It makes sense that the northern Tuscan village for some time turned away from the patron saint of miners and has turned to those of the butchers. In any case thank Saint Bartholomew - and Fausto Guadagni! For whether it was the heavenly power of Santo or the angry toughness of the most famous "lardaiolo" on that spot: The two gentlemen provided for the protection and preservation of one of the finest delicacies in Italy, which would have been nearly doomed - by the insanity of the more cosmopolitan EU hygiene guidelines as well as brash plagiarisms from industrial mass production. Guadagni, 50, is puzzling by his gray hair when he thinks of the attack of the Carabinieri on an autumn day in 1996: "You kept the Brussels decisions to me: Because we had no tiled rooms and no toilet in our basement, they closed our shop. " But Guadagni had just begun with the commercial production of a specialty, which was rather a private affair in Colonnata. The calorie bombs from the house pig, which had been slaughtered in the autumn and matured throughout the year in the family-owned "conca", were the men's traditional power food during their hard physical work in the quarry: At noon they sliced ​​thick slices of bacon on bread, chewed for a long time, and washed with one sip red wine and climb stronger then back into the rocks.

Guadagni, son of long-established landlords, had recognized the culinary potential of the Lardo as one of the first - along with the responsibility to keep the handful of secrets that guarantee his goodness. Therefore, he bent grudgingly the EU chicanes, and when tiles and toilet were properly installed, he got started with power in 1997 on the Via Comunale . Already outside the door this headstrong smell of sausage cuisine, oriental spice bazaar and Mediterranean herb garden reaches your nostrils. It wafts in the streets of Colonnata, as if the walls of the house were impregnated with it. It is produced at the time of slaughter from October to April. Then Fausto Guadagni drives the van once a week to his favorite slaughterhouse in Mantua, four hours away by car, where he stocks up with the back bacon of the powerful hybrid pigs called "Large White", after all from local free-range rearing. There he seeks his "spallotti" - the back halves of the lower edge of the shoulder to the top of the pig botty - directly on the assembly line and can still cut up them on site: 30 cm x 40 cm tall and a good 5 cm high, the pieces must b. All meat and the wobbly inner fat are peeled off except for a millimeter-thin, soft pink stripe of the shoulder, the rind cleaned with special files.

The immaculate white fat cubes, each about six pounds heavy, rest a few hours later in Guadagni's cool basement dungeon: Only when the bacon is fresh, it can be knead well and seamlessly pressed into the chests - the first secret of a faultless Lardo. The tighter the pieces are packed, the more hermetically they nestle against each other and the marble walls, the better the maturation. Secret number two, these are the herbal and spice mictures that come with into the "conca". Their individual recipes are kept by the families in Colonnata as if those of Coca-Cola. As a common good, Guadagni reveals, after all, is a basic mixture of cinnamon, cloves, coriander, black pepper, star anise, cardamom, fennel or dill seeds and mountains of fresh rosemary tufts, sage leaves and sliced ​​garlic cloves. Layer by layer, the bacon panels, previously rolled in abundantly hand-made salt, are then bedded alternately with lush layers of herbs and spices in the stone coffin. At the end, 300 kilos of bacon are stored in each container under heavy stone slabs, and over the year 200 lobals of Lardo mature in Guadagni's cellar.

EXCITEMENT WHEN HE OPENED A GRAVE OF A PHARAONIC

"Very important," explains Fausto and straightens his plastic apron, "is of course the marble." Lardo mystery number three. Only finest grain of glassy consistency of the type Canaloni it may be: As an ideal thermal container he breathe the bacon and leak only surplus salt, but not the important "salamoia": The brine arises during the first weeks in which the salt in penetrates the bacon and acts there as a pore opener for the flavor potpourri. It mixes with the juices of meat and herbs and exits as a liquid again. The Canaloni marble ensures the perfect consistency of the brine: it prevents the bacon gets a rancid and disgusting taste note. After six to eight months the aroma miracle is complete. When Fausto pushes the massive marble lid aside, it is a thrill, as if he opened a pharaoh's grave: Here store the noble loaves with their salt-hardened herbal coating - and the force of the fragrances that arise, robbing you almost the senses. 30 minutes by car from Colonnata at the ocean star chief Mauro Riccardi serves delicacies made of Lardo, fish and seafood. In the opposite, in the "Locanda Apuana" managed by Faustos sister Carla, the first Lardi of the season are tested under critical chewing - a ceremony that has little in common with the sturdy snack of the marble miners: Cut ​​into very thin slices, so that you can still recognize the table neighbors through them, the lardo is served today, preferably on "bruschetta" or "crostoni", the roasted, compact homemade white bread as a neutral base. When his tender fat fills his mouth with velvety enamel, unfolding a whole world of flavors like a great wine, reverent silence prevails in the dining room.

Interventions with the lardo's maturation process are only permitted if the climate allows it: In warmer winters occasionally water must be added to prevent the brine from drying out. "The climate," says Fausto, "is perhaps our most important secret: just like up here a good Lardo can not mature anywhere else." Not down in Massa and Carrara, for example, not even in Liguria and Emilia, wherever brazen manufacturers until recently produced tons of third-rate herbal bacon and sold it as "Lardo di Colonnata" at dice prices through domestic and foreign supermarket chains. As president of the consortium of the twelve "lardaioli" of Colonnata Guadagni fighted many years for the protection of the domestic delicacy: Only after innumerable inputs in Rome and Brussels and with the back wind of Slow Food, the noble bacon from the Apuan Alps was set on a list of threatened specialities, he received the desired seal of approval "Protected Geographical Indication" in 2004 or "PGI" for short. Today "Lardo di Colonnata" can only name what actually comes from the mountain village, has matured in six months without preservatives and cooling chambers, and bears the red seal with its production and origin code.

Many of star cooks les his own lardo mature in his private chest at Guadagni. For example, Fulvio Pierangelini, whose restaurant "Gambero Rosso" in the Tuscan coastal town of San Vincenzo is one of the best in Italy, has been experimenting with the bacon of an almost forgotten breed of pig, the Cinta Senese: Pierangelini Junior breeds the spicy bacon of the chocolate-brown animals with the bright shoulders colors in the chestnut and oak forests in the coastal backup area.  The maître of Guadagni makes it with fresh lavender, myrtle and white pepper; or sometimes with grated pepperoni pods, capers and fresh anise. His "Lardo di Cinta Senese", wrapped as a chiffon-like belly band around plump prawns and celebrated on chickpea mousse, reliably turns guests and critics guilds into true delights of delight.

Although occasionally still fake "Lardo di Colonnata" on the market, Fausto and his colleagues have today their livelihood: Their nearly 150,000 kilos of annual production are in demand as otherwise perhaps white Alba truffle, "and in comparison," sighs Fausto, "with 14 Euro kilo price (2007 !!) still quite cheap, measured by the effort we are doing". Especially in the summer months gourmets now in procession pilgrimage up the crooked mountain road to the village of St. Bartholomew. For the legendary delicacy of the "lardaioli" of Colonnata they like to go to the end of the world.

AND WHERE DOES IT GET THAT?

Or you drive to the following restaurants across the Alps: