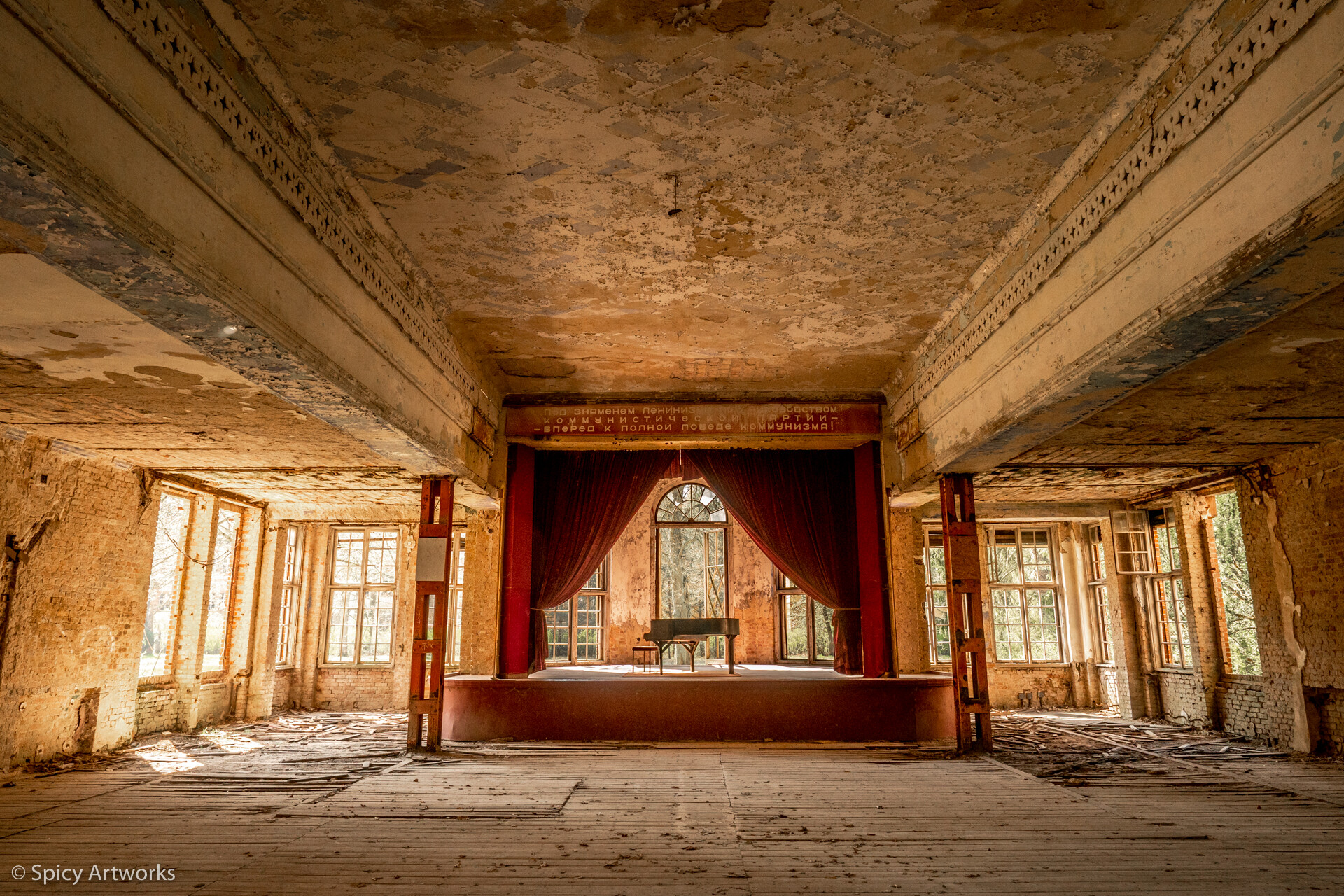 From a photographic point of view what is so desirable about "LOST PLACES", meaning "forgotten places"? Such deserted places often have something dark and mysterious, because here sticks the story of some decades on the walls. What you can bring back from there are really impressive shots and scary stories. We finally want to try it. A lot of internet research has been done at home. After all to find those Lost Places in Germany is really a hard work. Either they still exist, but they are strictly guarded and can not be entered, such as in Berlin the former GDR amusement area "Der Spreepark". Or everything is so dilapidated and locked that one would only get there at the risk of his life. Or it was actually commercialized as far as possible, such as the Berlin "Beelitz Heilstätten", which is surrounded by a treetop path and used by numerous tourists. But we did find Lost Places in Berlin twice:

A few kilometers north of the Berlin city limits Schmachtenhagen is located, a district of Oranienburg. Fences suddenly appear in the middle of the forest. Behind it the site of a former clinic appears. In 1896 the Red Cross built the first houses here. It was a pilot plant that was supposed to clarify whether tuberculosis in the lowlands should be cured. However, it was reserved for men. World War I and inflation put the sanctuary in economic trouble. Until 1918 prisoners of war were also housed here. Thanks to the discovery of antibiotics tuberculosis was later cured faster: Long hospital stays were no longer necessary and the facilities were no longer used medically. After the Second World War it was converted from 1945 to 1995 to a Soviet military hospital. The oldest of the roundabout 30 surviving houses is the director's villa dating back to 1903. It is a bit out of the way. Just like the youngest houses: Soviet buildings. In 1995 the life of the complex disappeared with the soldiers. What the army had not downplayed, now expires for 23 years.

A fenced area, right at the lake. The leaves are rustling, here and there the wind hits a door. Otherwise it is completely silent. A spooky atmosphere that has probably attracted George Clooney. Here the Hollywood star and his crew filmed scenes for the Hollywood movie "The Monuments Men".

And who wants to enter the approximately 34-acre site must pass Ursel. Ursel is a Caucasian bitch, which does not exactly welcome newcomers with wagging its tail. Ursel barks. Ursel bares its teeth. And first we take a few meters distance. Until Bernhard Hanke appears in the background and calls his dog to order. Hanke manages the site of the former pulmonary hospital. It was also he who received George Clooney when the mega-star was looking for his World War II drama.

The house number 1, an administrative building with a large ballroom. The windows are open, the floor is dirty. On the stage stands an old broken piano, the red curtain hanging useless. What a sad scenery! Perfect for Clooney's plan.

His film crew cleared up the hall and turned it into a movie set. Outside shots with a lot of dust and rolling tanks also existed. The expansive view of the Grabowsee is just as suitable as the rectangular courtyard around which the main buildings are placed. The terrain has often been used as a backdrop for film and photo shootings in recent years. In 2011, Artbase, an art and music festival, was held on the grounds. In 2017 it was used as a location for the film "Heilstätten", which was playing in the Beelitz Heilstätten.

After the administrator has handed us a piece of paper with a site plan we starts to explore the site. We walk through almost all 30 houses, upstairs and downstairs, almost all three floors high. Broken windows. Crumbling wall paint - in several different colored layers. Burst, weathered ancient windows. Only partially existing stairs. Suspended beams and linkage. Naked, cold tiles in sanitary rooms and former operating theaters. Super scary. A room with a thick red, cooroded upholstery like a lunatic asylum. Latticed windows. Eternally long corridors. What may have happened here ..... ?? !! And then suddenly many small and large works of art on the floor, in the rooms, on the walls. Carefully constructed and presented by young people.

After we had run around almost 6 hours, the eccentric manager from Bavaria invites us to drink a beer, which is really urgent at this time. In the subsequent conversation he tells us that he has big plans for the former pulmonary hospital, which are not cheap. The trained landscape gardener has been head of the organization "Kids Globe e.V." since 2005 under the patronage of Roman Herzog (former President of Federal Republic of Germany). He wants to set up a free educational facility for children and adolescents on the 35 hectare site. With workshops, a music studio, an academy, theater hall and much more. The owner of the site, who gives Hanke generously a lot of freedom since years, is ready for a sale. The only problem: The money is missing. "We would need about 17 million Euros for the purchase and the first year alone," Hanke says. With two people he is currently in conversation. George Clooney should not be one of these two men. One thing the actor and he have in common. They want to improve the world. "George Clooney has a great attitude to life," says the shirt-sleeved.

Two days later we are going to the second "Lost Place". This time in the middle of Berlin itself: The Ghost Station of Siemensstadt, which is located in the district of Charlottenburg on the border with Spandau.

In the past thousands of Siemens workers were waiting at the platform for the S-Bahn to and from work every five minutes. Today there is mysterious silence here. Since 1980 the S-Bahn stop Siemensstadt is out of service. At this year the West Berlin S-Bahn drivers went on strike against the bad working conditions. Their employer, the Reichsbahn of the GDR, drew consequences and stopped traffic on several routes. One of the first sections of the route affected was the S-Bahn Siemensstadt Since 38 years in and around the station the nature is slowly getting back everything it once had to give up.

We walk under an inconspicuous rusty trainbridge along a busy road and probably do not even perceive the station if we had not specifically searched for it. In front of the former entrance there is a broken-down construction fence, the doors and windows are provisionally nailed up with boards. We see no entrance or exit. In order to somehow come up anyway, we ask at a gatehouse of a neighboring large company, how to do that. As if the ghost train station had just been built there yesterday, we get the answer that one does not know that either.

To get to the ghost station we have to climb over a few higher, depressed fences. But it is not that easy. Behind the barriers an embankment of rubble and branches is waiting to be climbed. Caution is advised here, as there are syringes used everywhere. Once at the top, you stand on the tracks that end after a few meters in a small grove in the middle of the bridge. The platform is more than run down. The only thing left is a few switch boxes, cables and lots of debris. The old station clocks have no clock faces and rusting away. Small green leaves and beginnings of miniature trees pave the way through the collapsed concrete pavement and give us an even stranger feel as we walk over it. The stairs leading to the exit were walled up. The little houses where the friendly announcers once sat are impassable. 100 meters in front of and behind the station, nature has already won. The tracks disappear under tree roots and bushes. You can not continue.

We decide not to give up looking for "Lost Places" in our world after these two little adventures. So lets go on to new shores!